Establishment of Eberlestock
Eberlestock Company was founded by Glen Eberle in 1985. He was an active biathlete in those days and participated for the US in the Olympic Games in Sarajevo. He also took part in the World Cups 1985 in Ruhpolding, 1986 in Holmenkollen and 1987 in Lake Placid. During his athletic career he studied and graduated 1985 in Dartmouth. In this time he developed a new rifle stock for biathletes and the American biathlon team. From that period evolved the name Eberlestock. The new rifle stocks, which were lighter and sturdier compared to old models, were also sold to sports marksmen soon.

Backpacks
After that Glen became fighter pilot in the US Air Force. Furthermore he is a passionate hunter and outdoorsman. Through his experience in combat mission and from his hobby, the hunt, he knew that the possibilities to stow equipment and weapons were limited and uncomfortable. So he also began to develop something new in this field and to extend the the range of Eberlestock products with backpacks. Some of the first customers were American Snipers. Eventually the backpacks became the core business.

Eberlestock is synonym for efficiency and mobility – all the characteristics that are essential for those who serve their country in the armed forces. Whether you’re a hunter, a sportsman, soldier or in law enforcement: perfection is Eberlestock’s goal, an ambition mirrored by the quality of their products. Combined with a personal touch Eberlestock is one of the best manufacturer of tactical carrier systems, hunting backpacks and packing systems for weapons. The brand stands for highest quality, experience, creativity and functionality with a personal touch and is, to date, shaped through its founder Glen Eberle. Eberlestock has 20 employees today. Glen is the CEO and still significant for design and distribution. Whoever has the chance of meeting him, should not miss the opportunity to get explanations to the many functions of the backpacks by himself – like our customers here at the IWA 2018. 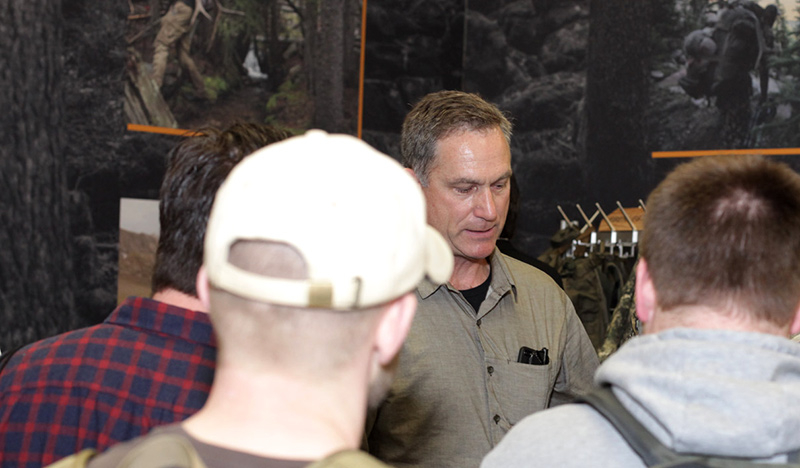 Eberlestock & HQG
HQG / Lindnerhof and Eberlestock work together since 2007. At that time our managing director Josef Sixt visited customers and in one way or another he had some Eberlestock backpacks with him. The backpacks awoke interest and that’s how it started!
The top seller amongst our end customers is the F3 Halftrack Pack.